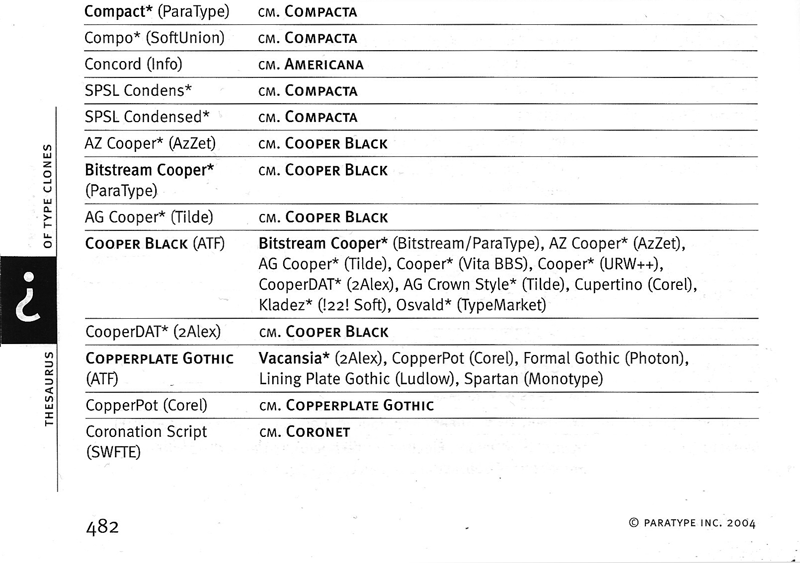 Claude Garamond designing in 2004, digital typefaces from 1936 and other curiosities.
It is surprising how rarely the authors of digital versions of all these Garamonds are credited. It gives a feeling that the translation of, for example, Benton’s metal typeface to Bezier curves is a mundane, almost purely mechanical task. In fact, the opposite is true: an adaptation of 16th century Garamond for the early 20th century printing machinery might be considered a task of mere conversion of an old typeface for the new specifications, while the translation of any metal typeface to a digital one (which can be: pixelated on screen, diffused by inkjet printer, milled out of wood two meters tall, lasercut on a tiny polymer stamp, printed with the coarse silkscreen mesh or with the 2400dpi offset) is a much more complex and ambiguous job.
First of all, what metal type size should be taken as the source for the new revival?

Even with the widespread use of pantograph, metal typefaces of the same name by the same foundry have a very different appearance in different sizes.
Image by Klim Type Foundry
Next, how do you convert the imprint to outline: should the ink spread become part of the new outlines as an integral part of the design or should the contours be made sharp and closer to the (assumed) intentions of the ancient author, who was merely hindered by the technology of the day? 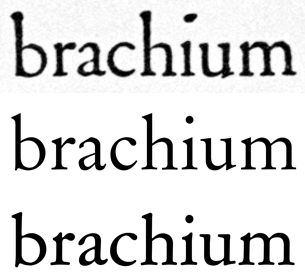 Garamond imprint compared to the modern revivals: Original Garamond (middle) and (bottom).
4. Romain du Roi is a typeface designed on commission by by the Bignon Committee, which was set up in the newly created Academy of Sciences with the goal to compose the compendium of all trades and professions. The Commitee started its survey with typography as 'the art by which all others are preserved'. Their creation, Romain du Roi, was arguably the first example of rational type design, a typeface that was not developed by the hands of punch cutters, but constructed on a grid by compasses and rulers, ignoring calligraphic models in favour of analytical and mathematical principles. However, Philippe Grandjean, who cut the punches for the metal type, took a lot of liberties to moderate the cold geometry of the original lettershapes, and the appearance of Romain du Roi in print is rather different from its original design.
And even if you are lucky enough to acquire the original drawings of the prototypeface, it is still often unclear how to translate them, as the difference between what was designed and what was casted in metal might be vast. Romain du Roi4 is a particularly evident example of such discrepancy. 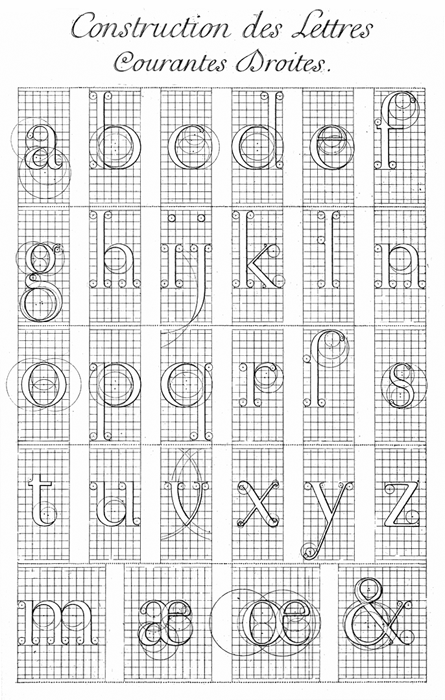 One of the engraved plates, showing the construction of lowercase Romain du Roi. 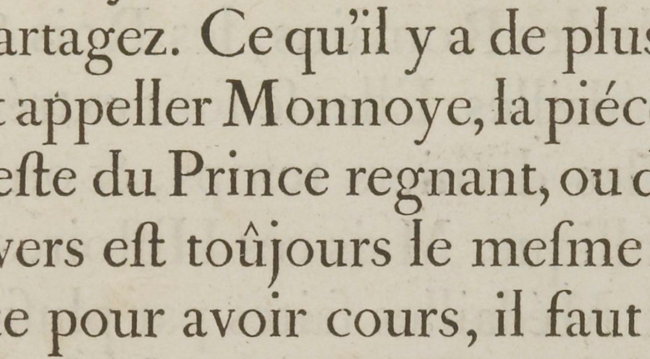 Romain du Roi as it appears in print. 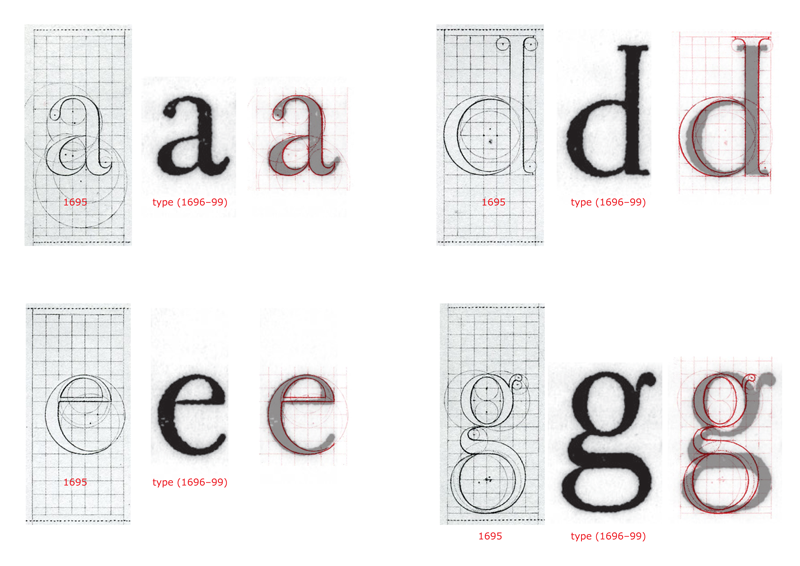 The original design compared to the imprints of the typeface.
Image from Riccardo Olocco’s «Romain du Roi. The surviving plates», 2013
It might well be that this confusion, that the mismatch between designed and printed Romains du Roi causes, is the reason why the typeface has only a few revivals, despite its unprecedentally well-preserved design documentation.
Gothic typefaces of the early 20th century (especially the American ones) present a particularly interesting case when it comes to the translation of crude old imprints to highly precise digital outlines. The irregularities and inconsistencies of these typefaces, emphasized by their simplistic lettershapes, make all the design (and production) flaws an integral part of their handdrawn appearance. An appearance, which disappears if the typeface is reproduced with the fidelity of modern type design software. 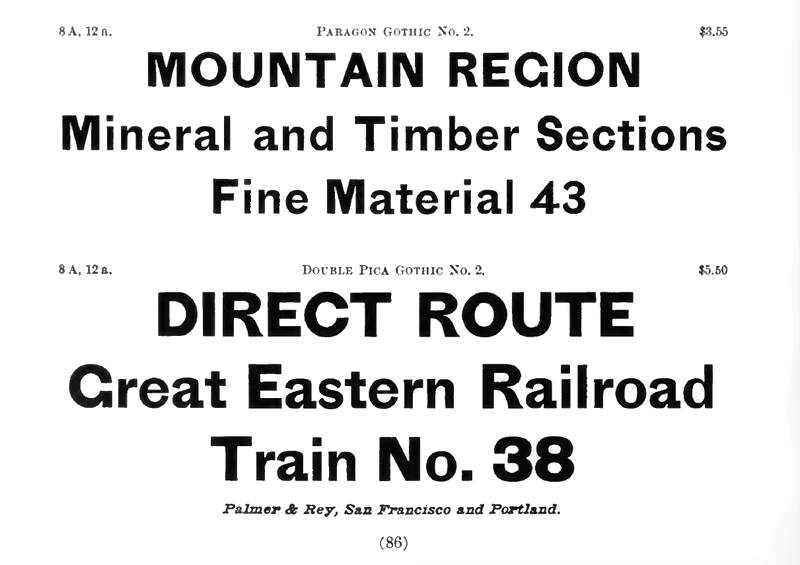 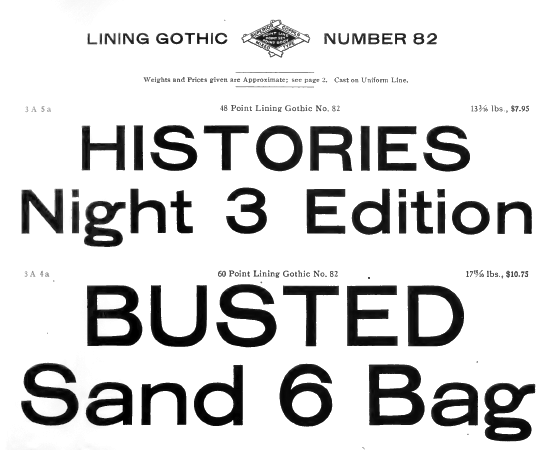 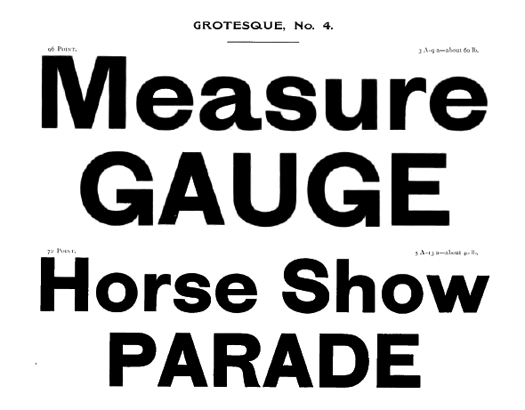 Most of the modern revival projects tend to either 'correct' the inconsistencies of the old typefaces in order to achieve high quality smooth typesetting...
Image: Founders Grotesk by Klim Type Foundry 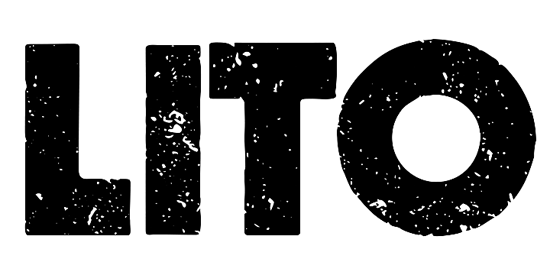 ... or make a fetish out of the old print appearance.
Image: Lito by Borutta Group
The new typeface — Steinbeck — is an attempt to catch the feeling of these numerous Gothic typefaces not by applying digital special effects, that simulate the inconsistencies of print, but by approaching the process of drawing the Bezier curves differently.
Drawing outlines in a computer vector program, it is too easy to rely on the measurement tool rather than on one’s eye. Too easy to make everything geometrically perfect and visually boring. It is almost irresistable to correct a humpy curve, uneven width, imperfect symmetry, an inconsistent thickness — ideal smoothness is just one mouse drag away. In Steinbeck many of the occuring inconsistencies were kept (and many were made intentionally): without fanatically collecting curious deviations, but rather with a healthy disregard for digital precision tools.

In some letters the top parts overhang the bottom.

Some letters are drawn narrower than the others.

The symmetry is often imperfect.

And some letters just have erratic contours in general.

Cyrillic lettershapes were largely influenced by Rublenaya, Russian version of Akzidenz Grotesk from the beginning of the 20th century. The influence is especially apparent in the shapes of к, ж and ф.

Some italic shapes of Steinbeck are borrowed from Emma Zakharova’s designs. In 1987 she developed an interesting italic style for Bukvarnaya (a Soviet sans serif for kids): many characters of her italic were based on handwritten shapes rather than the usual slanted or cursive ones.

The most notable letters being, probably, lowercase в, х and ж. Unfortunately, the italic styles of the original digital version of Bukvarnaya — TextBook by Paratype — have very crooked outlines and poor spacing, and the revised version of the typeface — TextBook New from 2007 — abandoned Zakharova’s designs in favor of the usual slanted shapes.

A typically handwritten shape of я was used in Steinbeck Italic in addition to Zakharova’s shapes of в, х and ж.

Cyrillic в and х are also used as Latin b and x.

The typeface features an alternative shape for r and, in italic, for z.
The resulting typeface produces irregular and uneven, but (most important) lively typesetting.
As of today, two styles — Regular and Italic — are released, but the plans are made to expand the family (above all, with bold and condensed cuts).
Best regards,
The Temporary State