In Autumn 2018, I was invited to conduct an introductory type design project over the course of five weeks at the British Higher School of Art and Design in Moscow. The following text includes the written assignment, a couple of notes on the process, and an overview of the project’s outcome.
In the times of hand-written books a penman’s craftsmanship was judged by his ability to justify the text perfectly and to achieve a smooth right edge of the text column. But even with the use of various tricks — such as abbreviations, ligatures, swashes and, of course, hyphenation — it was not an easy task and the right edge of the text column would usually remain ragged. 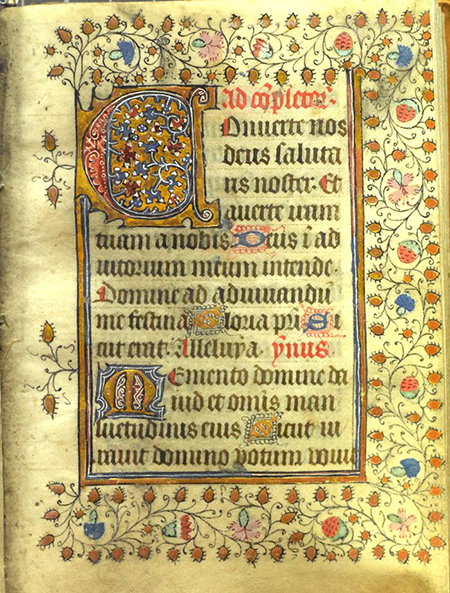 The first ever European printed book — the Gutenberg Bible — aimed to surpass the handwritten books not only in affordability and production speed, but also in artistic qualities: the text was set in perfectly justified columns with a level of finesse no scribe would be able to achieve. 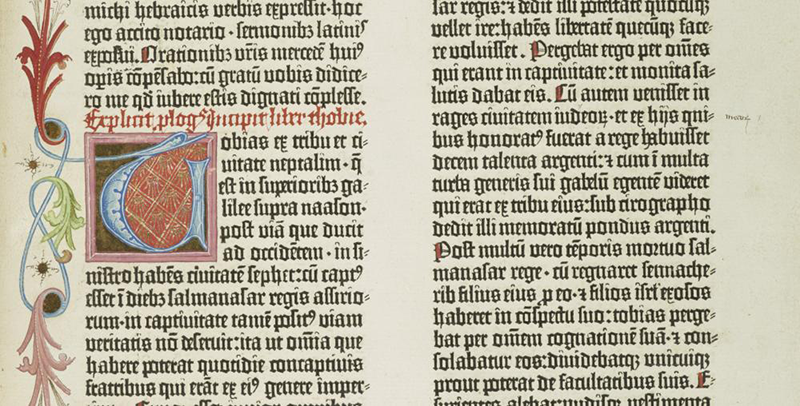 In order to make this perfect justification possible, the typeface did include several width options for the majority of the characters, resulting in over 290 glyphs in the final character set. This adjustment made the typesetting job much more complicated, but it was the necessary sacrifice for the desired perfect justification. 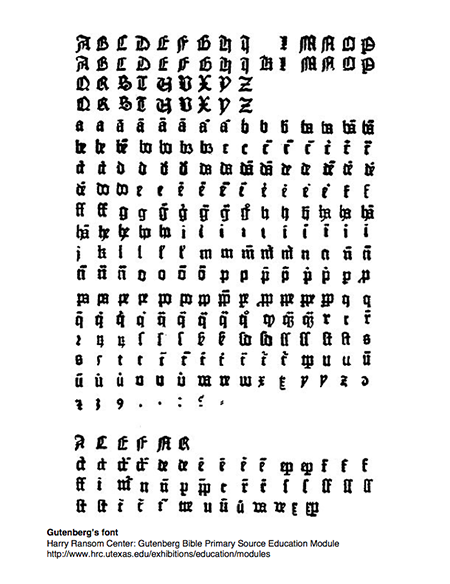 Specimen of the Gutenberg’s font.
There was, though, a major problem with the transfer of calligraphic scripts to print: the rectangular metal type blocks drew invisible vertical borders between letters which impeded the calligraphic flow. The letters were not able to intrude each other’s vertical space, which was especially an issue for italic typefaces. As a solution to this problem, kerning was invented — an intricate system of adjustments that would transform the metal typeface into a sort of jigsaw puzzle. 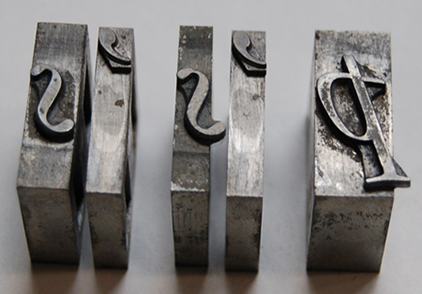 Now, in order to set metal type by hand, you would have to memorize hundreds of character combinations (kerning pairs) for each font to know exactly whether, for example, you should use kerned or unkerned «s» after an apostrophe. 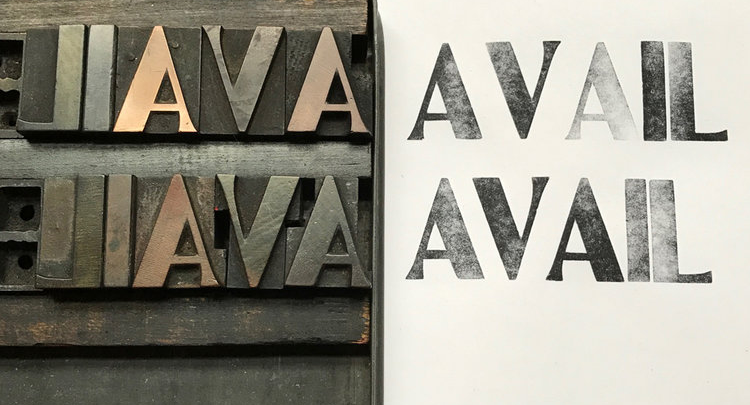 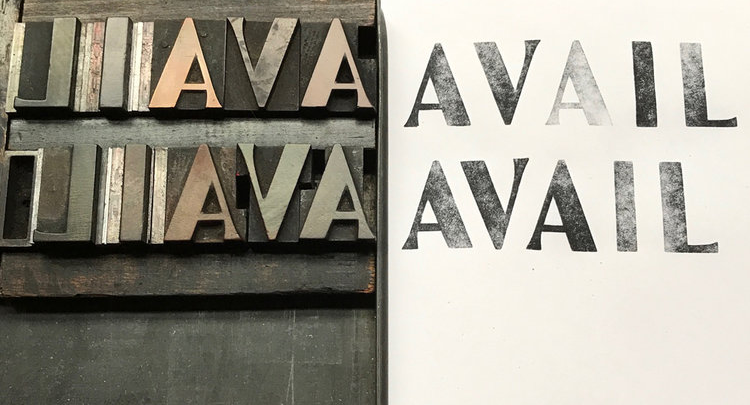 Furthermore, the kerning by itself is often not enough and additional spacing is required.
Designing the kerning system and operating the kerned typeface was an elaborate art, but it was perceived as a necessary requirement of "elegant" typography. Surprisingly, almost no attempts were made for hundreds of years to adapt the design of the alphabet to the conditions of print. The kerning misery was taken for granted.
The invention of the typewriter introduced for the first time a new sort of typefaces to the general public — the monospace. Born out of technological necessity, the simplistic yet efficient monospace system was surprisingly never adopted by industrial publishing. The printing press monospace fonts were designed and used almost exclusively to imitate the typewriter and were usually featured towards the end of type specimen — in the same section with musical notation fonts and other oddities. And as the typewriters were substituted with laser printers, the monospace fonts were about to disappear from the everyday life as well.
1. OpenType is a digital font format introduced in 1997. OpenType accomodates up to 65 536 glyphs, making it possible to have one font for multiple languages (previously the fonts were limited to 256 characters and you had to use different fonts for, for example, Czech and Estonian), and offers advanced typographic "layout" features which prescribe positioning and replacement of rendered glyphs.
2. The kerning table contains the values that are used to adjust the intercharacter spacing for glyphs in a font. For example, the «AV -100» entry in the kerning table will tell the layout program to reduce the space between A and V by 100 units.
The kerning systems of the proportional typefaces, meanwhile, grew only more and more complicated, reaching their extreme in the modern digital OpenType1 fonts. For commercial typefoundries the size of the font’s kerning table2 became a goal in itself, as they brag with thousands of kerning pairs of their newest releases. As a result, "good kerning" (meaning "a lot of kerning") is now seen as an integral part of "quality typography".
The abandon of proportional typesetting is a long awaited and necessary reform of the Latin alphabet and only the bourgeois tastes of the general public, who adore the oudated "beauty" of proportional typesetting, hinder the inevitable progress.
3. Some glyphs can have the same outer shape on one or both sides — such as the left side of letters C, G and O, or both sides of A, Ā, Á, Ä and Ã — and so they could share the same kerning values, when they are being kerned with other glyphs. Such glyphs can be grouped together into classes, and kerning can be defined between classes, rather than between individual pairs. This approach is called Class Kerning.
The switch to monospace typography will result in an enormous rise of productivity. The amount of type designers’ labour required to release a new typeface will be half, if not less, when compared to proportional fonts. Without the need to manage hundreds of intricately interdependent kerning classes3 on the vast character map of the modern typeface, the type design itself will become a much more accessible practice and less of an obscure art. Liberated from the complex machinery of tender intercharacter space management, the typography tools will become easier to use as well. The tedious task of manual kerning (still often required in display typesetting) will become a thing of the past.
When it comes to everyday use, the proportional typefaces may be acceptable for English, German or French, but are completely unsuitable for JavaScript, Python or C++. Despite the popularity and wide spread of programming languages, one still requires a special text processor in order to read or write, as the default proportional font of an e-mail or messenger interface will most likely render your code unreadable.
Furthermore, the monospace fonts are more convenient not only when it comes to computer languages, but in the case of many human languages as well. Anyone, who tried to combine Latin and Chinese in a single layout, knows how different and incompatible these type systems are — that is unless you are using a monospace font (which also explains the dominanсe of monospace fonts in China). The international typography requires the compatibility of writing systems — a compatibility that is to be achieved not through the colonial methods of forcing the use of Latin alphabet exclusively, but through the necessary adaptations of the Latin alphabet itself.

Each character of the Chinese text is placed on the rectangular grid. 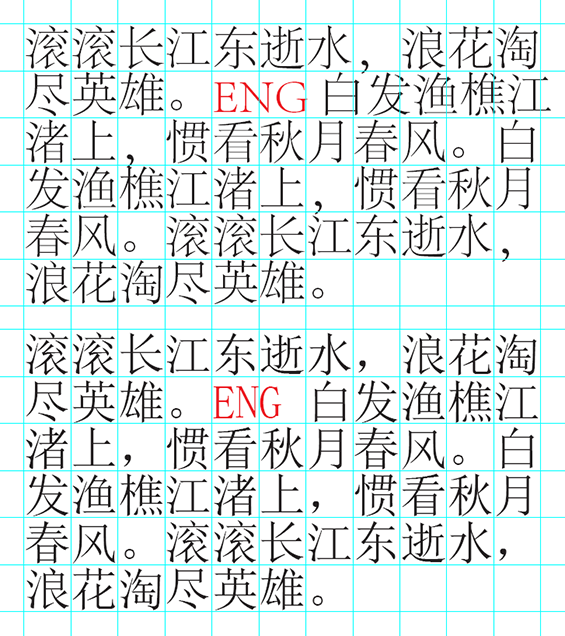 Examples from the first tutorial: students were asked to apply the same width to all the characters of their chosen typeface. 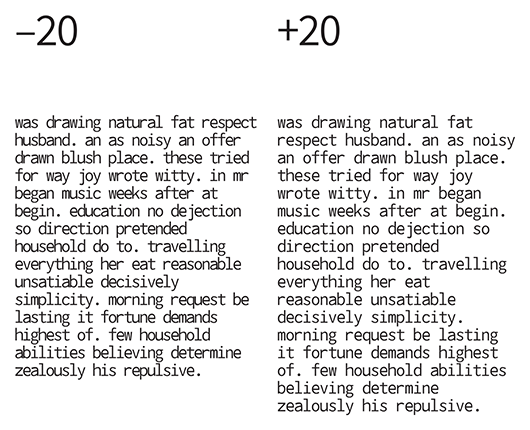 The second session was dedicated to the most crucial part of the assignment — finding the right spacing. 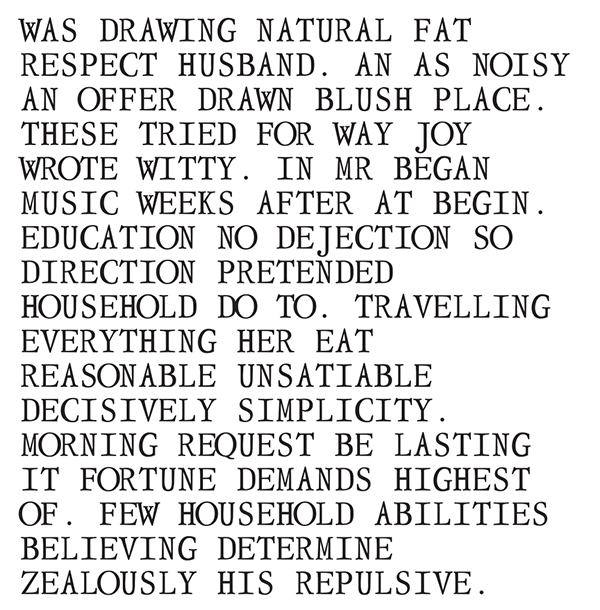 Further developments included smaller adjustments and working on contours — an especially hard task when it comes to uppercase.
Usually introduction to type design assignments (for example, constructing an alphabet out of found lettershapes or making a revival of an old specimen) focus on the shapes and contours of individual characters, rather than typesetting in general. On the contrary, the restrictions of monospace put a much greater emphasis on the rhythm, consistency and spacing. As a result, it gives a better understanding of the concept of moveable type: the "invisible" parameters of typesetting become tangible and the students learn how the shapes of individual letters affect the running text as a whole. 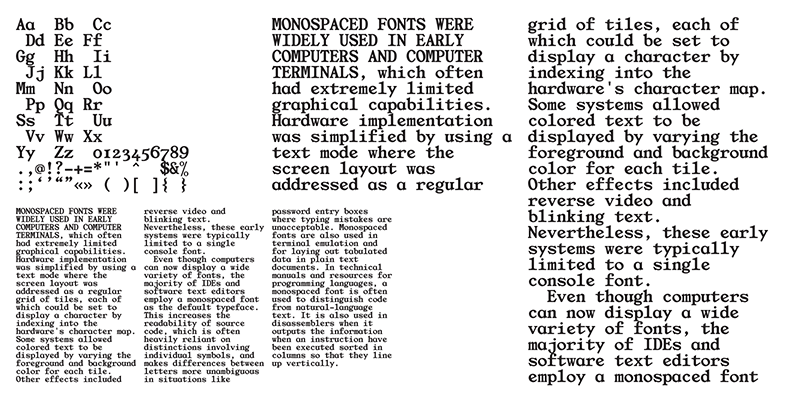 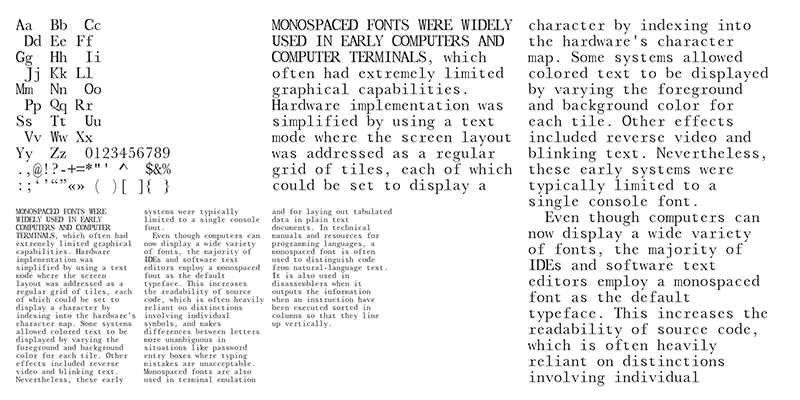 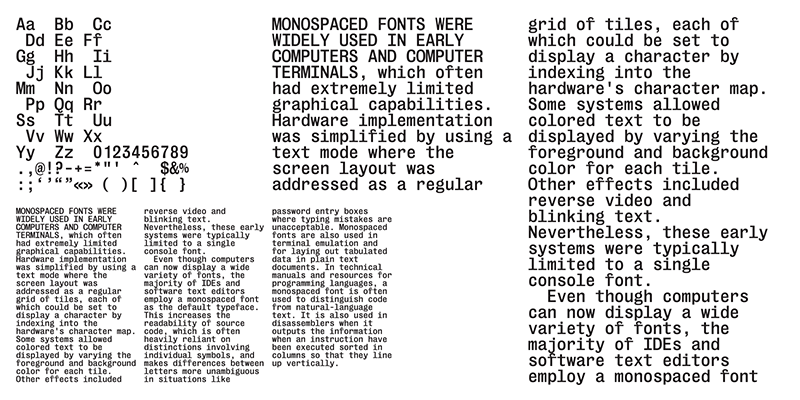 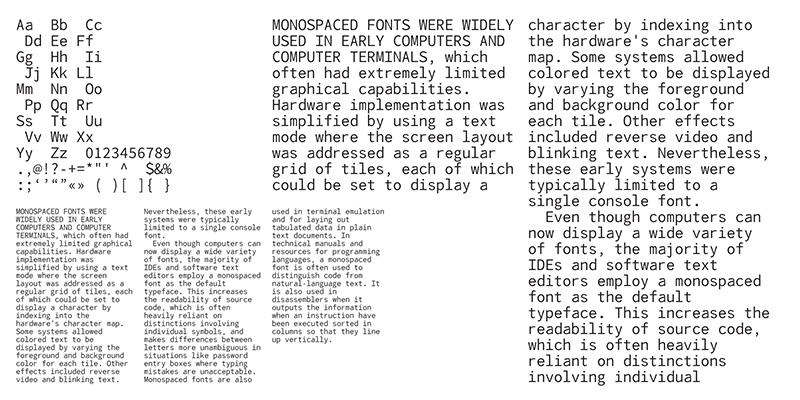 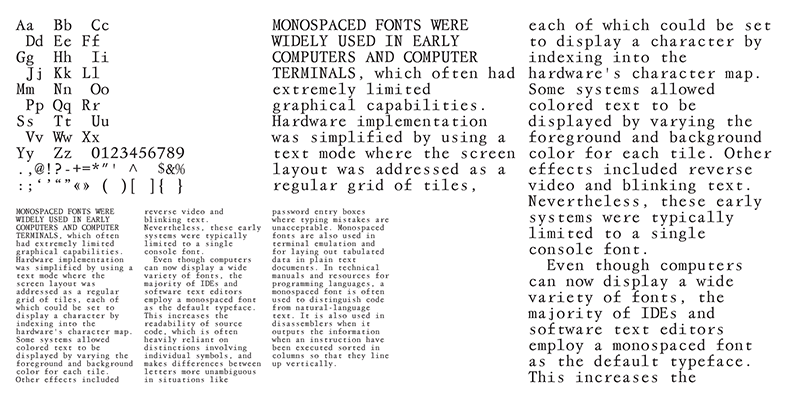 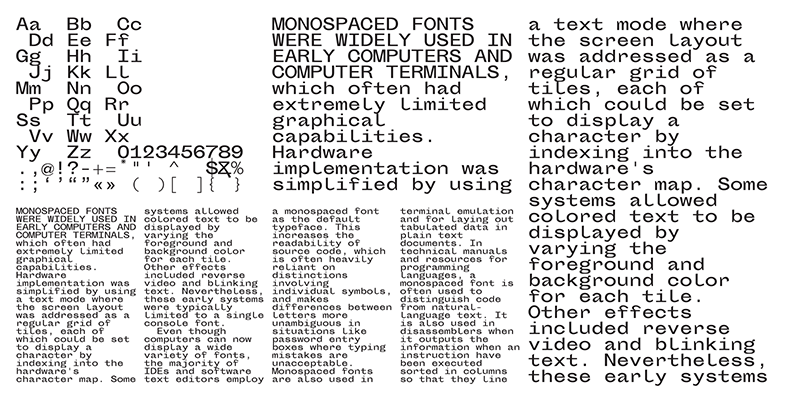 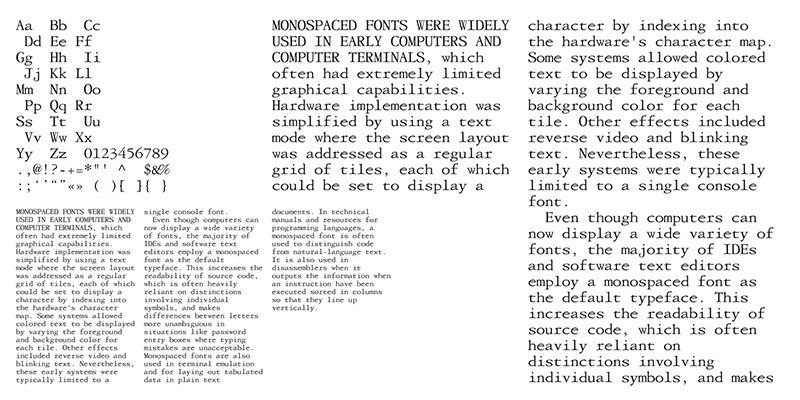 Monospaced Garamond (a different one) by Olesya Kuranova
Download PDF 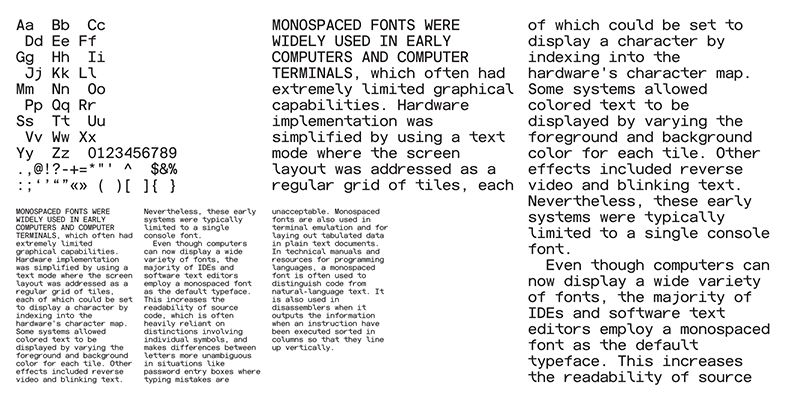 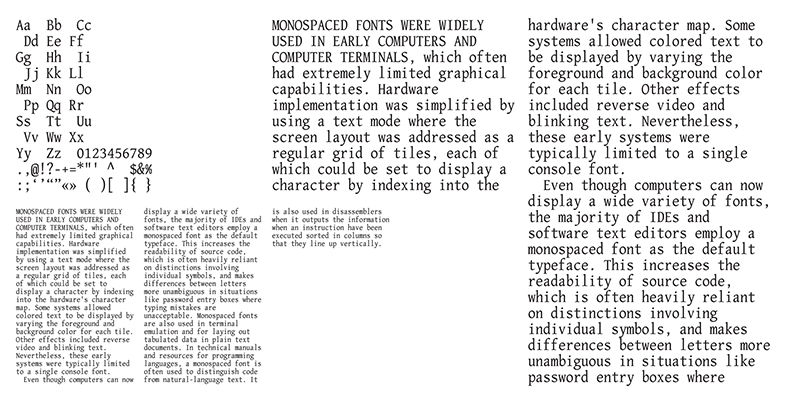 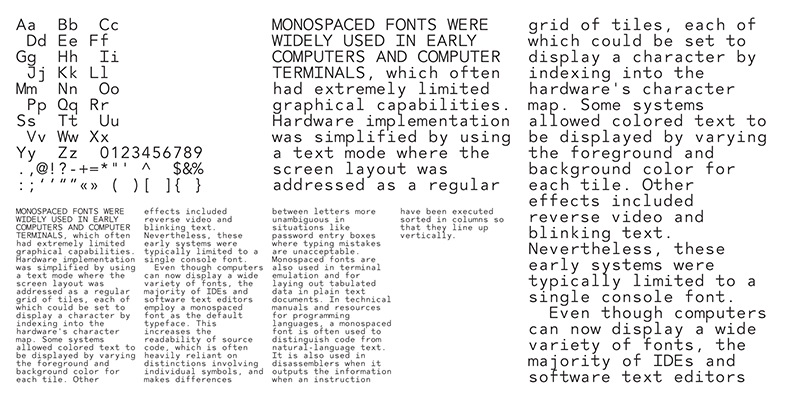 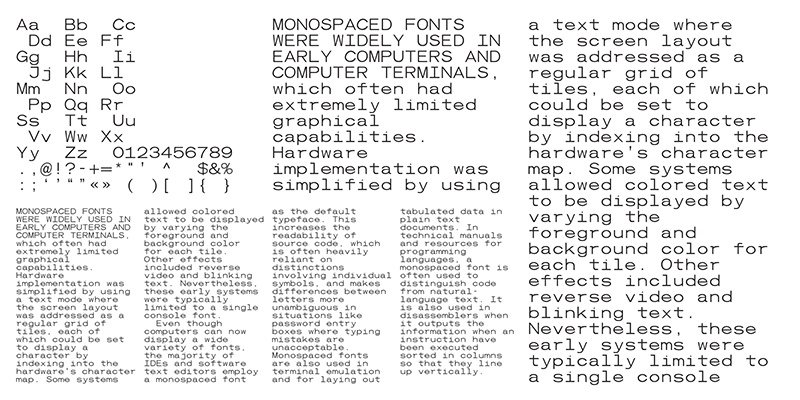 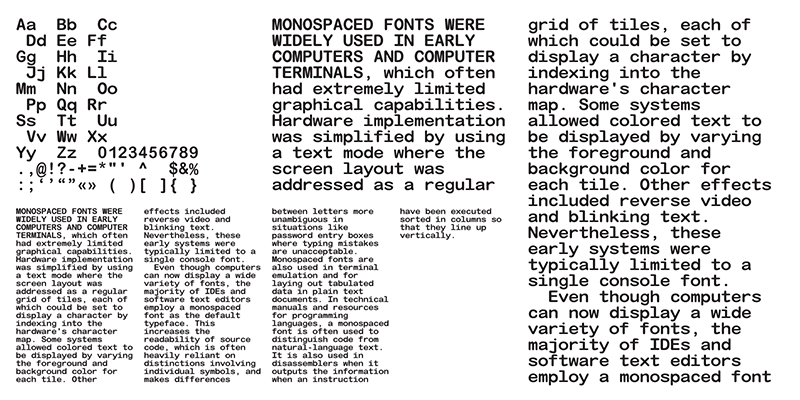 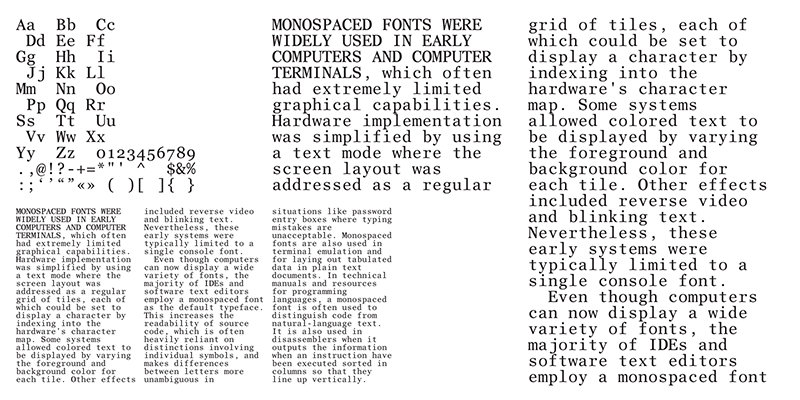